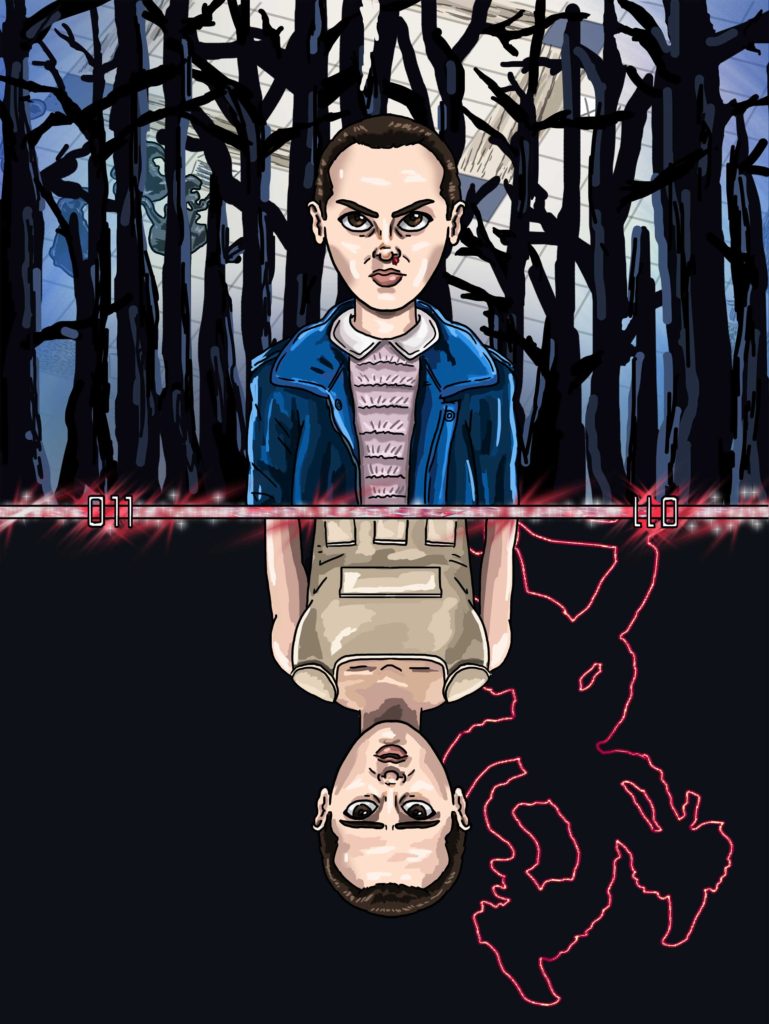 This piece of digital art is of the character Eleven from the Netflix series, Stranger Things.  It is for the Twitter account called @Sketch_Dailies.  Stranger Things is the story of the investigation into the disappearance of Will Byers, a young boy, in the town of Hawkins, Indiana in the 1980s.  Will’s friends, a group of three boys his age, realize quickly that this isn’t a normal disappearance when they come across a girl named Eleven with psychokinetic powers who knows what happened to Will.  They begin their own search for their missing friend.

Eleven escaped from a local top secret laboratory where she was the victim of experiments, as well as being sent to another dimension she called ‘The Upside Down.’  This piece of artwork shows Eleven in our world, as well as The Upside Down.

In the first episode of the show, Will and his friends are playing Dungeons and Dragons and Will’s character in the game is defeated by a monster called the Demogorgon.  After the game is finished and the boys bike home, Will encounters a monster close to his home, and mysteriously disappears.  The top half of the piece features Eleven in the woods where Will’s friends, Mike, Lucas and Dustin, find her and features the Dungeons and Dragons board in the background to represent our world.  It is showing Eleven using her psychokinetic powers.  When she uses her powers she always gets a slight nosebleed.

The bottom half of this digital art piece shows Eleven in The Upside Down.  The Upside Down was shown as a distorted version of our own world, or a pitch black void.  It is in this pitch black void where Eleven encounters the monster for the first time.  Mike, Lucas and Dustin call the monster the Demogorgon, and it is represented as the Dungeons and Dragons game piece rather than its true form.